Different Tubes is an artistic research project on clarinet and bass clarinet preparation. Based on collaborative practice, the project wants to stimulate a questioning, individual approach to our music tools and to the same performer’s role.

⇒ Go to the Preparations section 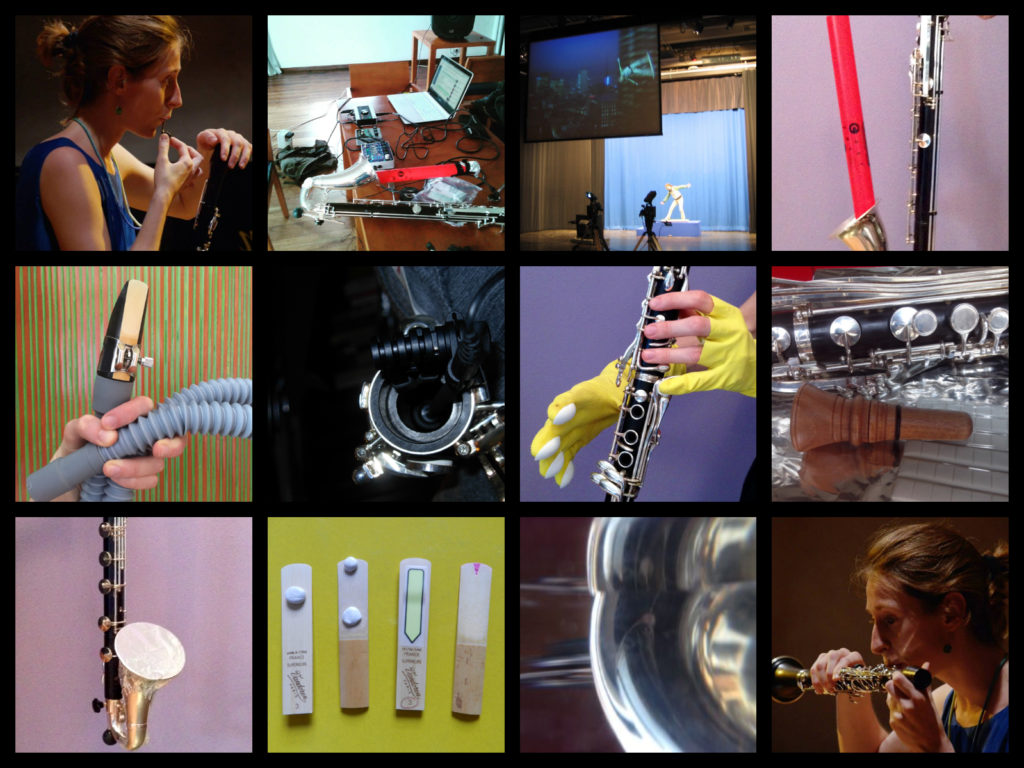 Customizable tools
As we all know, a musical instrument is not a neutral tool. Its technique and sounds are the result of choices performed in historical continuity (or discontinuity), that contribute to the self making of the instrumental idea. The historic process of acoustic instruments’ enhancement to their present day “optimal” appearance if, on the one hand, led to the creation of the musical corpus of our western tradition, on the other hand has as a side effect the atrophy of the idea of the instrument as a customizable music tool.

Despite the triggering role that preparation had in the development of other instruments’ repertoire and technique, its use on wind instruments, is, to date, extremely rare and sporadic, with very few examples of pieces written for prepared instruments that entered the repertoire. The Different Tubes project, bringing together the roles of performer, composers and luthier (and different kinds of expertise, needed from time to time), wants to stimulate a research work on the instrument and its technique, and develop a new repertoire for the prepared clarinet family. For this project I make myself and my instruments available to composers, leaving them complete freedom on ‘how’ to intend preparation – read, build their own instrument.

As a matter of fact, even though with “preparation” we normally mean the physical modification of an instrument in order to change its sound, the same word can describe radically different treatments and approaches. Preparation can be material augmentation or subtraction, be temporary or permanent, on the surface or internal. It produces determinate or indeterminate sounds, mono or multi-timbral, it can mute or help the resonance. Preparation is instrumental transvestism, is the possibility of sounding different and inappropriate for the familiar instrument. Collage, sculpture and theatre at the same time, preparation is the metaphorical destruction of the instrumental image that gives birth to a new, hybrid device, with an enlarged sound palette at disposal. Challenging organology, the familiar instrument assumes constantly renewed sonic, visual, gestural and imaginative characteristics, and reveals itself transfigured, each time reinvented according to the composers’ expressive needs.

The project
The aim of this research is that of offering to composers and sound artists the possibility of questioning the instrument and its traditional technique according to personal aesthetic goals. The possibility of forging our own instruments, of expressing ourselves with fresh, new-made tools, instead that with fixed, given ones, is to me an extremely fruitful path to follow for all us music makers, and an inspiring approach for anybody that deals with creative issues.

The choice of a specific preparation is always the result of a personal sonic and gestural imagery.
“How can I get a… sound?” and “what happens if…?” are the apparently contradictory questions that arise at the beginning of every preparation work. In the posts of the section Preparations I will present, time after time, what our “starting questions” were, and how we practically tried to answer them.

Preparation possibilities are countless, depending on our imagination only. Therefore, the aim of these posts is not to offer an exhaustive (and impossible) panorama of all the preparations possible on the clarinet and its family, but rather present our collaborative work and the topics and questions that arise from it.